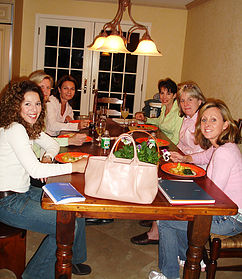 Ten years ago this month I was home with two little girls back in my hometown trying to figure out how I was going to move forward in life after witnessing what our community and people from around the world had done for my sister in the weeks and months following the death of her husband in the South Tower on September 11, 2001.

I remember vividly sitting in my kitchen with thoughts of starting a group for women about being aware in our own lives and giving to others. I remember I was afraid to move forward with my ideas, but I was more afraid of waking up ten years later, engulfed in small town static, wondering what would have happened if I had followed through…I remember thinking, “Who the hell am I to start a foundation?”

Well, I was someone who had witnessed the kindness that literally carried my family through the most excruciating year of our lives. That’s who I was now.

So I began with eight women around a table.

I kept at it for ten years.

Now it’s an advisory board of eight women around a table, 70-100 women at monthly meetings and 500 women on an email list, open and engaged in their own struggles and those of others.

I was afraid I could never repay what had been done for us. How would I possibly repay what had been done? The notes of love sent from all over the world, the teddy bears made out of John’s shirts, the random gifts left by the front door, dinners delivered through April, the cars and cars that drove up her driveway to bring her kids to sports, the bills paid in secret at a restaurant where we went to lunch, the centerpiece dropped off at Thanksgiving, the chocolates at Easter, milk and eggs dropped off every Monday morning, money donated by complete strangers.

All these types of seemingly small gestures translated into a daily reminder that when the worst happens, God shows up through other people.

So for ten years we have been mailing love notes, having teddy bears made out shirts, leaving gifts at doors, delivering meals, helping with carpools, treating people to lunch, helping make seemingly impossible holidays festive, grocery shopping for families who are too sad to shop for themselves and giving money for medical bills and grief related expenses.

I have tried to remember every thoughtful gesture done for my sister and her family, but I am sure the fog of that first year has lessened my memory. Honestly it seems impossible to describe, which is why we just do.

Please join us at our next meeting and make the connection between your own losses with those of others. Our greatest hope is that it helps you to feel less alone, more purposeful and grounded. We would love to see you there.

Heartworks on the Today Show

Losing My Mind for Christmas
Scroll to top