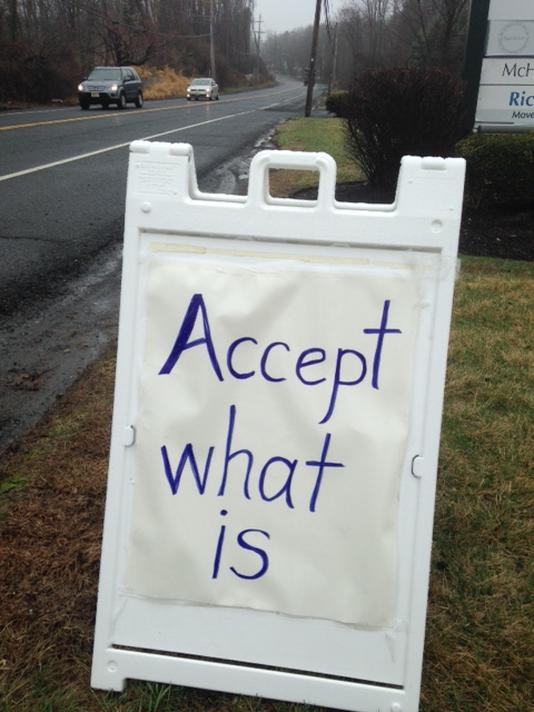 If I were a person driving past this sign on my way home from a 2 for 1 deal on Big Macs at McDonalds and was thinking about something I was struggling with, I would roll down the window, whip one of my Big Macs at the sign, and happily watch the two whole beef patties, special sauce, lettuce, cheese, pickles, onions on a sesame seed bun dribble down the stupid sign. Keep in mind that this is a hypothetical situation. So I always eat Big Macs in hypothetical situations and since I am throwing one out the window, I had to be coming back from a 2 for 1 deal so that I would still have one left to eat.

Next, I would pull over and emotionally eat the other Big Mac in total irritation toward whoever wrote that ridiculous sign. The idea seems absurd and not well thought through at all. Why in God’s name would I “ACCEPT WHAT IS” when the thing I would have to accept totally sucks?

Well…I’ll tell you a story about why to consider practicing acceptance even when what you are being asked to accept something that totally sucks.

Ten years ago this June, I stood in the parking lot of the church I grew up going to. Thousands of Sundays were spent there with my family. Thousands of times we got out of our cars in the parking lot and walked toward the church for mass. On that particular day 10 years ago, Eddie pulled our car into a parking space and I was expected to get out of the car to attend my father’s funeral.

Instead, I sat in the car with my hand on the handle of the door and looked out the window filled with annoyance at all the people getting out of their cars, apparently in total acceptance of this idea that someone you love can be here one minute and gone the next…they seemed to be ACCEPTING my father’s death and that pissed me off. “How can they be doing this?? So…what…we are just going to get out of our cars and go into the church and have MY FATHER’S FUNERAL???? Three days ago I was standing in the kitchen with him.

He was leaning against the dishwasher and we were laughing and now people are getting out of their #%&*@ cars to go to his funeral??? I mean people were actually walking into the church!! Like they were just letting this whole “my father died” thing continue to happen!! I wanted to get out and punch my Aunt Agnes in the head and yell “STOP! STOP! STOP! I’m not doing this!! I’m not just accepting this death thing!!”

Damn it. I got myself out of the car but started walking in the opposite direction of the building. Maybe if I don’t go into the church this won’t be happening. Maybe if I ignore all of this, it won’t be true and my dad will get out of one of these cars and pull me into a hug and say something like “That was a weird couple of days Moo Moo, wasn’t it? It’s alright my sweetheart, its not really happening, I’m right here” and then we could just walk home together and get back to our week.

Nothing from my two masters degrees in counseling or my ten years as a therapist could have offered enough proof that this was not a plausible option. I walked a few more feet and then the realization hit me as if someone had punched me in the head. A conversation I had with a therapist friend a week ago flooded my mind. She had said that God is only accessible in the present moment, so if we deny what’s happening in the present moment we are keeping ourselves from God.

I had spent the next few days thinking about this and its implications. I had thought about the fact that the times we often feel furthest from God are when we are wishing things to be different than they actually are and that the one thing I knew in that moment, standing with my back to the church was that I needed every friggin’ thing a higher source could possibly offer me.

Crap. ACCEPTANCE was the way I would receive the things I needed. But ACCEPTING this was going against every single ounce of my being…to walk through those red arched doors and accept the bagpipes, the coffin, the crowd, the words of the priest. But it was abundantly clear that I needed God and I could only be with Him if I was present in this moment, and in this moment I was at my father’s funeral. And so I slowly turned myself around and walked through the doors and stood under the same crucifix I stood under for my communion day, wedding ceremony, and my daughter Caroline’s baptism, and I attended my father’s funeral.

Sitting in the pew, I came into the awareness that by accepting what I did not want; the filled pews, the words spoken on the alter, the songs and the traditions, that all of these things somehow created a coating of love over the desperation I was feeling. If I had walked home (or to the bar around the corner) I would have still felt the desperation, but piled on top of it would have been things like isolation, anxiety, and horror. The acceptance saved me from adding to the hell I was already in. The way I see it, whatever is taking place in our lives is happening whether we like it or not, want it or not and whether or not we are comfortable with it. Acceptance is the one thing that gives us a direct connection to the invisible presences, the only things that make surviving terrible experiences possible.

I am not suggesting we have to accept everything about everything all at once (though if you are up for it, go for it). I am suggesting that by committing to accepting one moment in whatever the suffering is, it will move us into the next moment and then the next and that in each moment that we choose to be in acceptance we will have increased access to God. This is what I discovered during the impossible month of June 2005 when one of my greatest loves left the earth. I have practiced acceptance ever since and it helps me tremendously and gets easier the more I make the choice to do it.

As soon as I open my eyes in the morning I pray to God to help me accept the parts of myself and my life that I would LOOOOOOVE to ignore, stuff down and ultimately deny. These prayers prevent me from pushing fear and worry to the back of mind where they will only reek more havoc in my life. The sign outside of the Heartworks House will be changing soon and I’m surprised that not one person has thrown a Big Mac at it…but then again I don’t think Mickey D’s is currently having a 2 for 1 offer and who would want to sacrifice a perfectly good Big Mac for the sake of acceptance?

Reflection: What areas of your life you are spending a lot of time wishing things were different than they are?

Consider practicing accepting one moment, one piece of what is actually happening and see what shifts for you.

Let Go of What Was
Scroll to top